It is well documented that print customers’ needs and priorities continue to evolve. They demand not only cost-effective solutions, but also convenience and flexibility when it comes to ordering. They want shorter print runs, a wider variety of services and faster turnaround times.

In this environment, any competitive print shop needs to remain agile and respond to customer demands, taking advantage of available technology while managing their costs of production to ensure that they remain competitive. This is as true in the In-plant print world as it is for general commercial printers.

Take, for example, the Louisiana-based East Baton Rouge Parish Public School System (EBRPSS), whose printing is handled by the Graphic Arts Department, which services over 90 schools, 6000

employees and over 43,000 students. The Department has seen its own evolution over time, meeting the changing demands from within the school system.

The Wild, Wild West
A decade ago, the Graphic Arts Department printed mostly bulk black and white forms that were warehoused, but this started to change quickly. 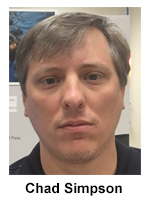 printing, and today everything we do is on-demand – in most cases it is a week turnaround or less. This caused the number of jobs running through the print shop to increase significantly. We needed a way to track it.”

They also needed to simplify the ordering process and reduce the manual touches involved in producing each job, as well as giving production teams access up-to-date job information.

As Chad observed in an In-plant Graphics magazine interview in 2013, “Sometimes it can feel a bit like the Wild West; orders come from everywhere—e-mail, walk-ins, fax machines and the mail. The artwork files might come in from one way, such as e-mail, while the print request form might arrive in the mail three days later.”

A New Era
They searched for a solution that didn’t require a large upfront investment and didn’t require the upkeep of a server. After an unsuccessful attempt to implement an MIS from another vendor ended up in a lot of finger-pointing,

in 2013 Chad Simpson and the Graphic Arts Department chose a new solution – PressWise by SmartSoft, a cloud-based, end-to-end print MIS and workflow automation platform. The all-in-one nature of PressWise, including its ability to create unlimited custom storefronts for each school or department, was a big selling factor for their In-plant shop.

“We used to print sixteen different forms and send them to the warehouse to replenish their stock after they distributed forms to the schools. Now, we print for the schools as they need them. At the beginning of this year ninety orders came in with various forms on each order and exact counts of what they needed.

“We went from dealing with one customer and sixteen print jobs to dealing with 90 customers and nine-hundred individual print jobs. This saved the schools system money because now they never throw outdated forms away. This would not have been possible without PressWise.”

Just a decade ago they were still working with hand mockups and running the majority of their work on single color offset presses. So much has changed.

“Now we are running well over a million digital impressions a month, and use PressWise to track all the work in the shop. The production screen is like the central hub of the shop. You can glance at it and know where you are in terms of run times everywhere. The percentage split by numbers of jobs is now roughly 33% Color printing, 38% Black and White, 11% Large Format and 18% Screen Printing.”

Another aspect of PressWise that the Graphic Arts Department enjoys is the level of support that PressWise prides itself on.

“Support has been great. It is amazing that so much gets updated in the system, yet there has not been a single update that has negatively impacted us. Probably my favorite feature of the system is the knowledge base; it allows you to dive in and get stuff done without having to wait on anyone.”

A Bright Future
In a time of uncertainty for many In-plant print shops, it appears that the Graphics Arts

Department for EBRPSS has hit upon a formula for success under Chad Simpson, based on their innovations and ability to not only observe shifts in their business, but proactively change to take advantage of them.

“The print shop has changed so much since I’ve been here, but I can’t imagine doing what we are doing now without some sort of MIS. Since we implemented we have grown substantially in volume, orders, revenue, and services provided. I don’t look necessarily see it that PressWise made the print shop grow, but rather it made it possible for us to handle our growth.

Obviously, it has helped make sure things are done on time and made sure things don’t get lost in the shuffle. It has eliminated typesetting of business cards, letterhead, envelopes and other documents.

“Since we have implemented PressWise we have expanded our services, relocated to significantly larger facilities, and have become the largest governmental print shop in the State that I know of. All of this without having to dramatically increase our costs. When we first implemented PressWise we had 8 staff – and we still have the same number today!”

For Chad Simpson and the Graphic Arts Department at the EBRPSS, the change has been so significant that he isn’t looking backwards at how things used to be done – only looking forward to a bright future for his In-Plant.